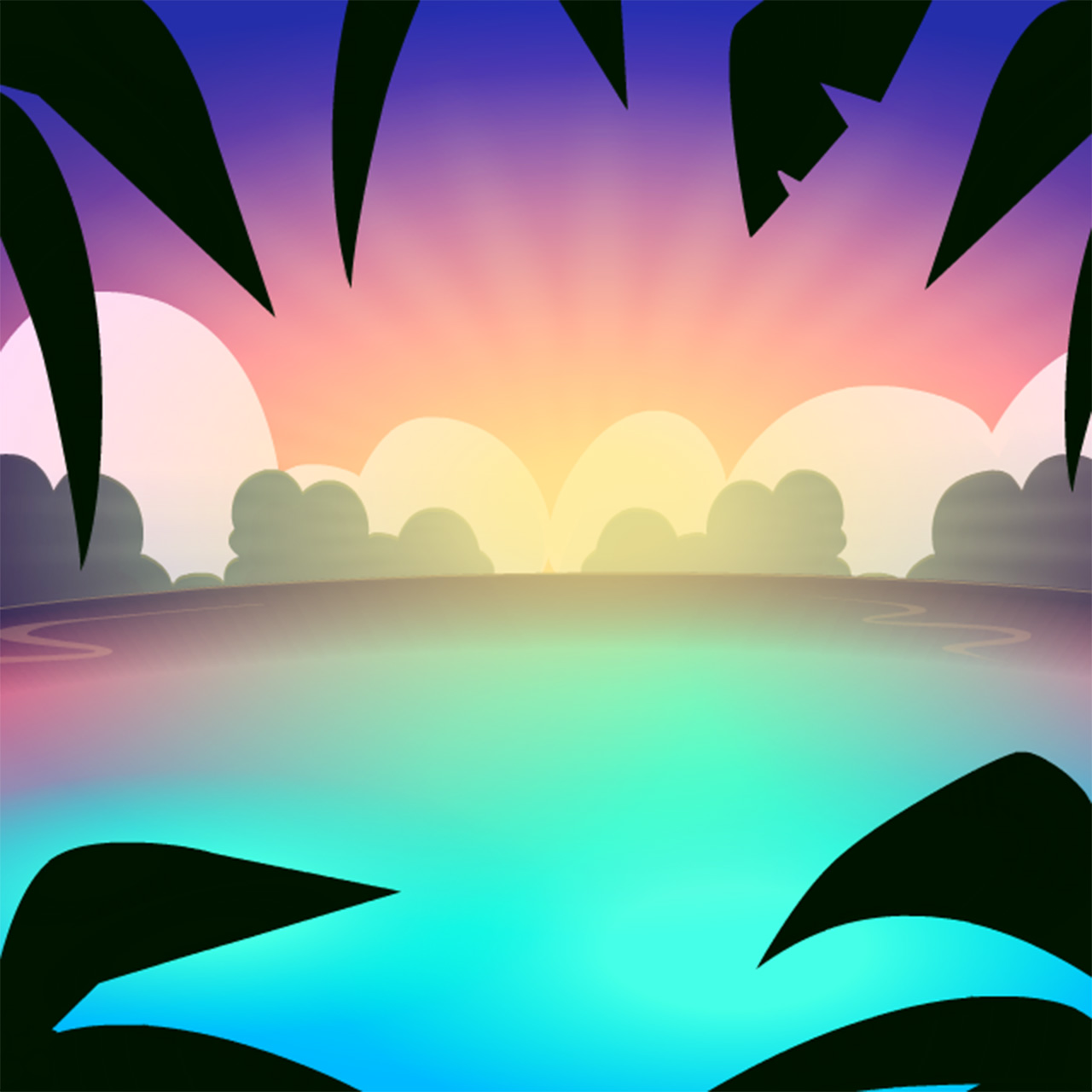 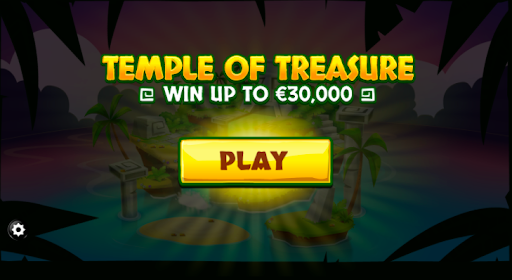 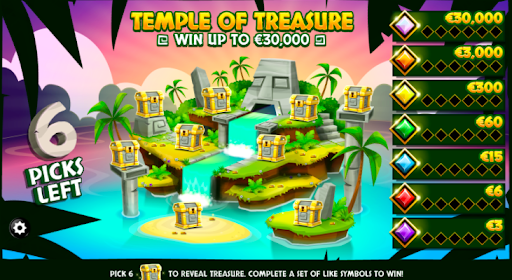 2.At the start of the game you have 6 picks. 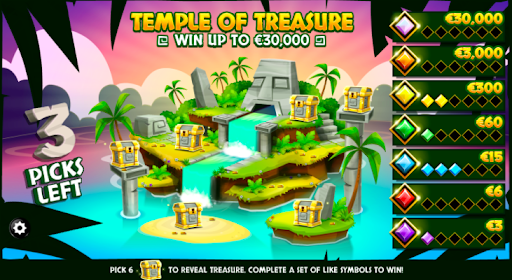 3.Click 6 Treasure Chests to reveal symbols for the prize table. 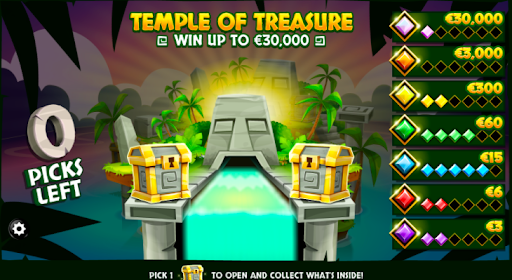 4.In the Bonus Game, click 1 of the 2 Treasure Chests to reveal extra symbols for the Prize Table. You also have the chance to return to the main game by revealing up to 2 Extra Picks. 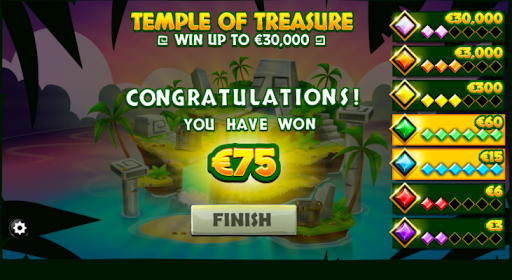 5.Complete a set of like symbols in the Prize Table to win the associated prize.

The Interactive System must be available for play. A registered Player may play a “Try for Free” game for notional prizes by selecting the “Try” link in the Game Play Window. In order to play a National Lottery interactive Game, a Player must first register on-line from a link on www.lottery.ie in accordance with the PLI Terms and Conditions. The Player must have a valid Player Account. Players must be 18 years of age or older to Play the Game and Prizes will not be paid to persons under 18 years. The Player is required to log in to the Interactive System by entering a User ID and Password (created during the Player’s original on-line registration process) to gain access to this Game. When the Player has logged in to the Interactive System a choice of Games will appear on the instant win game lobby. The Player chooses the “Temple of Treasure” Game by clicking on the “Play” link on the Game Play Window. The Player is then shown a brief “How to Play” synopsis of the Game and is invited to ‘Play Now’ or ‘Try’. When the Player chooses ‘Play Now’ he is then shown the price of playing that Game and current Wallet balance, at which point the Player is invited to ‘Play Now’. When the Player opens the Game the Interactive System checks to ensure that the Player has sufficient Unutilised Funds to complete the transaction. The cost of the Play is deducted from the Wallet balance and the amended Wallet balance is displayed. The Game then connects to the Interactive System which randomly selects a Play which may yield a Prize from one of the Prize Tiers for this Game. The result for a Play is randomly determined by the Interactive System. The Player’s interaction with the Game does not impact on the result. The opening screen is displayed along with a ‘Settings’ button (cog symbol – bottom left hand side) which will open to display two further buttons: the Sound button and the “i” button which contains the synopsis of how to play the Game. On clicking ‘Play’, the Player is presented with a Game Play Window which displays the following: A Treasure Island populated with 9 ‘Treasure Chests’. A picks meter containing 6 picks at the start of the game; A coloured gems ‘Prize Table’ containing 7 prize amounts; The instructions ‘PICK 6 (TREASURE CHECK ICON) TO REVEAL TREASURE. COMPLETE A SET OF LIKE SYMBOLS TO WIN’. The objective of the game is to use your picks to select ‘Treasure Chests’ on the Island to open. Clicking on a ‘Treasure Chest’ will reveal between one and four gem play symbols for the ‘Prize Table’. The ‘Prize Table’ contains a total of seven prize rows, each with six segments and set prize values. The Player is awarded six (6) picks at the start of the game. To commence Play the Player must click on a ‘Treasure Chest’ play icon to reveal between one and four defined play symbols. The revealed symbols populate the relevant row(s) in the ‘Prize Table’ automatically marking one by one, starting with the icon revealed on the left through to the right. This process repeats itself until all picks have been taken. Once all six (6) picks have been taken in the ‘Main Game’, the ‘Bonus Game’ will appear on screen as an overlay over the Island. The ‘Bonus Game’ consists of two (2) ‘Treasure Chest’ play icons. The Player must click on one ‘Treasure Chest’ play icon to reveal extra gem play symbols which will populate the relevant row(s) in the ‘Prize Table’. The Player also has the chance to return to the main game by revealing up to two ‘Extra Picks’. If the ‘Bonus Game’ reveals an ‘Extra Pick(s)’, the game instructions will update to reflect how many picks are remaining and the remaining unrevealed ‘Treasure Chests’ in the main game will animate to prompt Player interaction. The Player must then use their ‘Extra Pick(s)’ to reveal extra gem play symbols to the ‘Prize Table’. If the Player reveals a winning outcome, by completing a full set of like symbols in the ‘Prize Table’, the corresponding row(s) and associated prize amount(s) will highlight in gold to show a win(s). Once all of the picks have been used and all of the prize rows are updated, the game ends. Once the game ends a message indicating the result will appear: BETTER LUCK NEXT TIME or CONGRATULATIONS YOU HAVE WON <AMOUNT> The Player is required to acknowledge this message by clicking the FINISH button. The Game then ends and the Player is shown the game confirmation screen If You purchase a Play and do not complete the Play, the system will automatically play out the Play within 24 hours. If a Low Tier Prize is won then that Prize will be paid directly into the Players Wallet. If a Mid-Tier (Level 1) Prize is won then that Prize will be paid by cheque and posted to the address specified in Your Player Account. If a Mid-Tier (Level 2) Prize is won then that Prize will be paid by cheque, stamped “Account Payee Only”, which will be posted to the address specified in your Player Account, upon receipt of a completed Prize Claim Form and your Identification Information (if not previously provided). If a High-Tier Prize is won then the Player will be notified and the Prize will be paid by cheque, stamped “Account Payee Only”, and which must be redeemed at National Lottery HQ subject to completion of a satisfactory validation process, including but not limited to your Identification Information.
Download a copy of the National Lottery Temple Of Treasure rules (PDF)