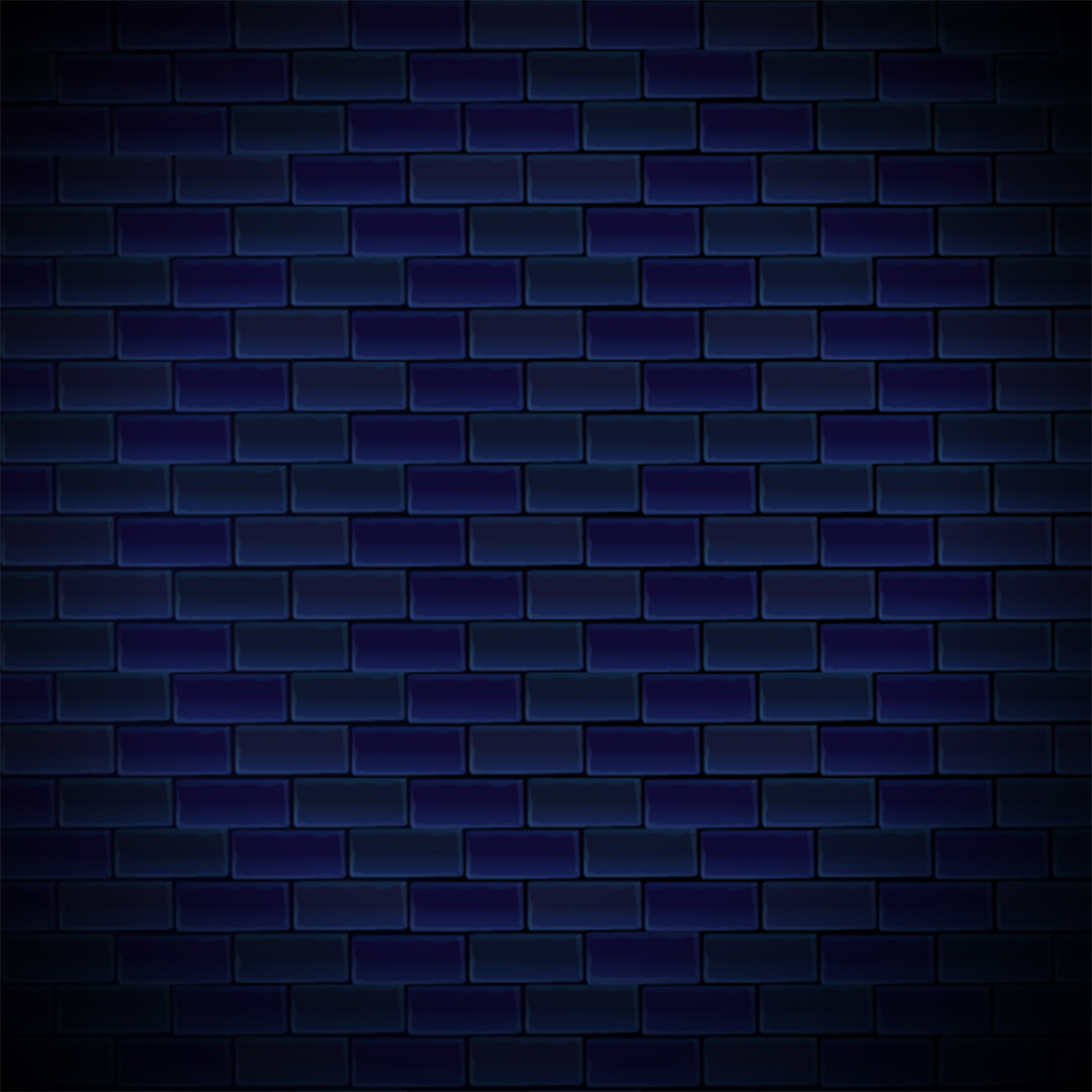 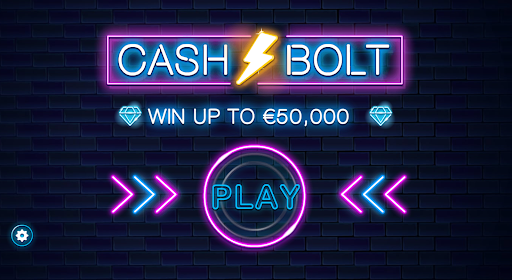 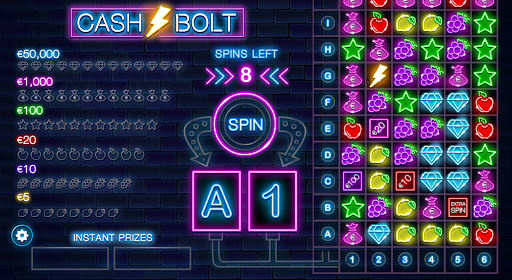 2.You are awarded 8 spins at the start of the game. 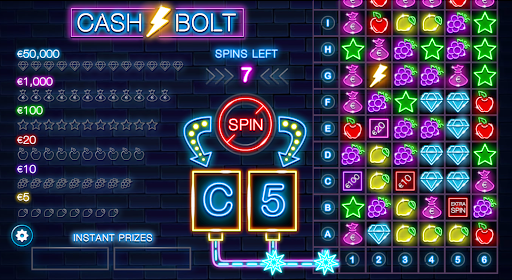 3.Tap SPIN to reveal coordinates on the Play Grid. 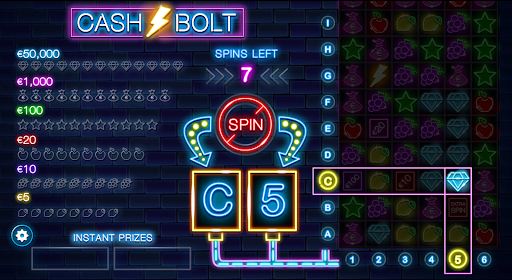 4.You will collect the icon from the coordinate revealed... 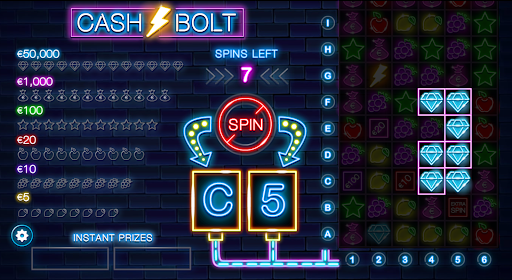 5....And any adjacent icons of the same colour. 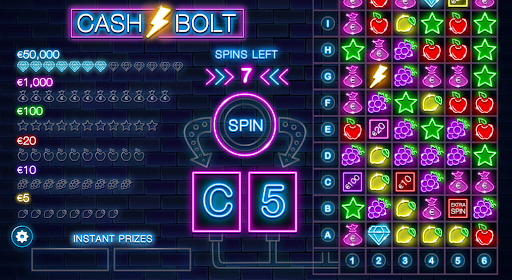 6.The symbols collected will populate the Prize Table. 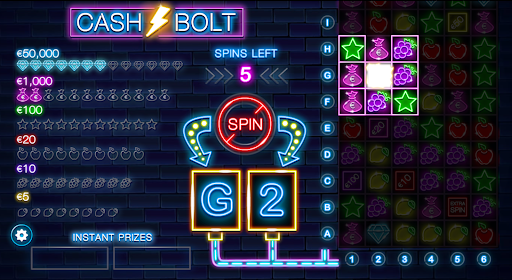 7.If your coordinates land on a Lightning Bolt icon, you will collect all 8 surrounding icons, regardless of colour. 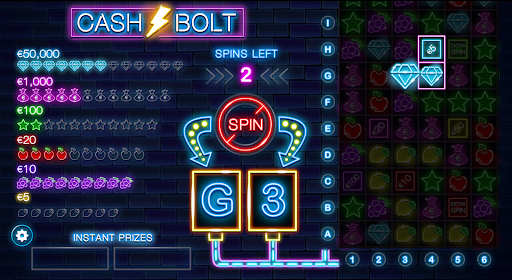 8.If you collect an ‘Instant Prize’, you will win this amount instantly! 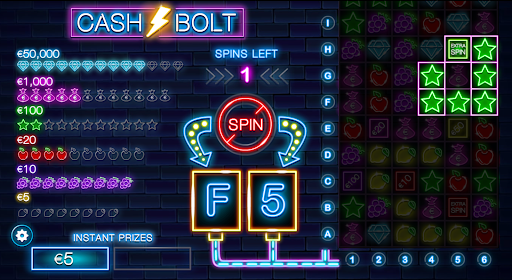 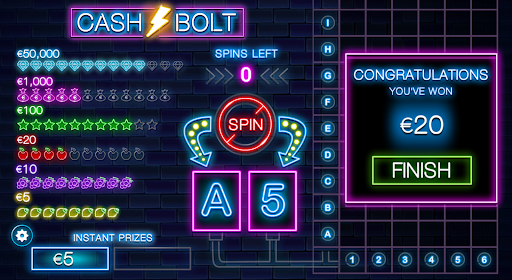 10.Fill a row in the Prize Table or collect an Instant Prize to win!

The Interactive System must be available for play. A registered Player may play a “Try for Free” game for notional prizes by selecting the “Try” link in the Game Play Window. In order to play a National Lottery interactive Game, a Player must first register on-line from a link on www.lottery.ie in accordance with the PLI Terms and Conditions. The Player must have a valid Player Account. Players must be 18 years of age or older to Play the Game and Prizes will not be paid to persons under 18 years. The Player is required to log in to the Interactive System by entering a User ID and Password (created during the Player’s original on-line registration process) to gain access to this Game. When the Player has logged in to the Interactive System a choice of Games will appear on the instant win game lobby. The Player chooses the “Cash Bolt” Game by clicking on the “Play” link on the Game Play Window. The Player is then shown a brief “How to Play” synopsis of the Game and is invited to ‘Play Now’ or ‘Try’. When the Player chooses ‘Play Now’ he is then shown the price of playing that Game and current Wallet balance, at which point the Player is invited to ‘Play Now’. When the Player opens the Game the Interactive System checks to ensure that the Player has sufficient Unutilised Funds to complete the transaction. The cost of the Play is deducted from the Wallet balance and the amended Wallet balance is displayed. The Game then connects to the Interactive System which randomly selects a Play which may yield a Prize from one of the Prize Tiers for this Game. The result for a Play is randomly determined by the Interactive System. The Player’s interaction with the Game does not impact on the result. The opening screen is displayed along with a ‘Settings’ button (cog symbol – bottom left hand side) which will open to display two further buttons: the Sound button and the “i” button which contains the synopsis of how to play the Game. When the Player selects the ‘Play’ button an interactive graphic is presented to the Player on the Game Play Window displaying a 6 x 9 play grid with numbers 1 to 6 on the horizontal axis and letters A to I on the vertical axis, a ‘SPIN’ button with a ‘SPIN’ counter and a prize table containing 6 prize amounts and an ‘INSTANT PRIZES’ prize area. The Player is awarded eight spins at the start of the Game. The Player clicks the ‘SPIN’ button to spin the two coordinate panels, each will determine a horizontal and vertical coordinate with the two coordinate panels displaying ‘A 1’ before the commencement of play. When play commences lights are activated and travel to the coordinates on the play grid indicated below the ‘SPIN’ button. The icon on the play grid indicated by the lights and coordinates is then collected along with any connecting icons of the same colour and design (excluding diagonally). For every coloured icon collected, one position within the same design/coloured prize row in the prize table will be highlighted. If a Player collects an ‘EXTRA SPIN’ icon of any colour, the Player will be awarded with an extra spin and one position of the same colour in the prize table will also be highlighted. The ‘SPINS LEFT’ indicator will also increment by one spin. If a Player’s coordinates land on a ‘Cash Bolt’ the Player will collect all eight surrounding icons, regardless of colour. These icons will highlight in the prize table. If a Player collects an ‘Instant Prize’ icon the Player will win that Prize amount. ‘Instant Prize’ icons are available in the following prize amounts: €5, €10, €20, €50, €100. The aim of the Game is to fill a row in the prize table to win the corresponding Prize amount and/or collect an ‘Instant Prize’ icon(s) to win the Prize amount(s) highlighted. A Player can win up to four prizes on a single ‘Cash Bolt’ Play in which case the Player will be entitled to the sum of all prizes won. Once the game ends a message indicating the result will appear: BETTER LUCK NEXT TIME or CONGRATULATIONS! YOU HAVE WON <AMOUNT> The Player is required to acknowledge this message by clicking the FINISH button. The Game then ends and the Player is shown the game confirmation screen. If You purchase a Play and do not complete the Play, the system will automatically play out the Play within 24 hours. If a Low Tier Prize is won then that Prize will be paid directly into the Players Wallet. If a Mid-Tier (Level 1) Prize is won then that Prize will be paid by cheque and posted to the address specified in Your Player Account. If a Mid-Tier (Level 2) Prize is won then that Prize will be paid by cheque and posted to the address specified in Your Player Account, upon receipt of a completed Claim Form and proof of identity and age. If a High-Tier Prize is won then the Player will be notified and the Prize will be paid by cheque, stamped “Account Payee Only”, and which must be redeemed at National Lottery HQ upon receipt of a completed Prize Claim Form and proof of identity and age.
Download a copy of the National Lottery Cash Bolt rules (PDF)