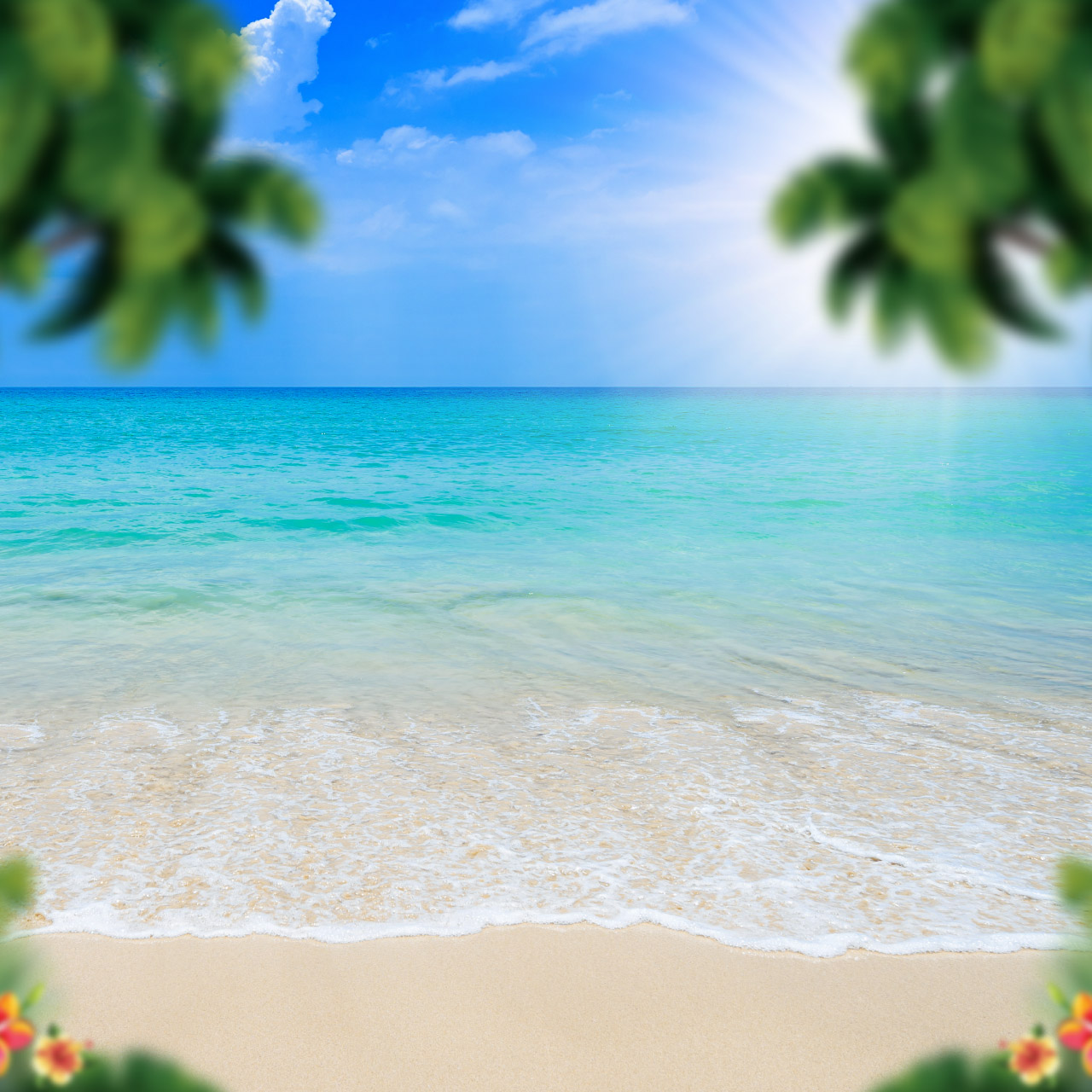 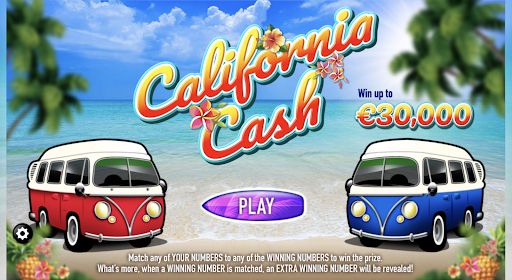 1.Please ensure that hardware acceleration is enabled before playing this game on a desktop browser. 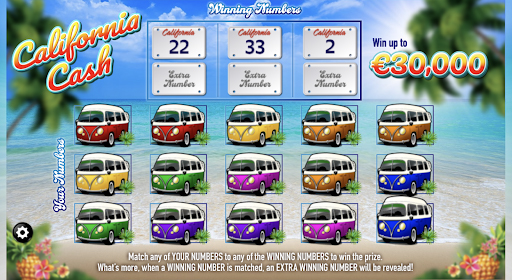 2.Tap the fifteen Camper Van icons to reveal a number (between 1 and 40 inclusive) and an associated prize amount. 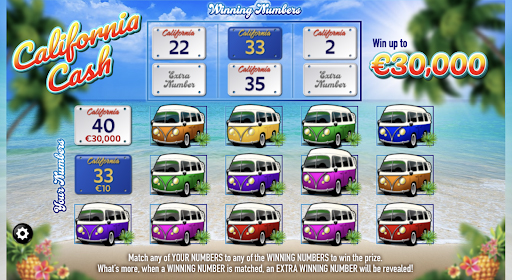 3.If one of YOUR NUMBERS matches with any of the WINNING NUMBERS, the associated EXTRA WINNING NUMBER will be revealed automatically for you to match against. 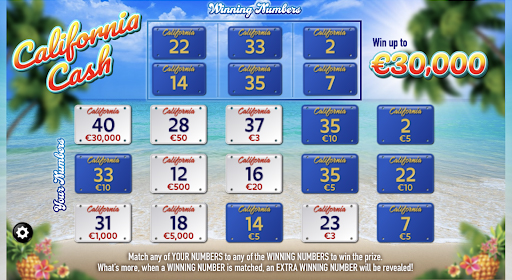 The Interactive System must be available for play. A registered Player may play a “Try for Free” game for notional prizes by selecting the “Try” link in the Game Play Window. In order to play a National Lottery interactive Game, a Player must first register on-line from a link on www.lottery.ie in accordance with the PLI Terms and Conditions. The Player must have a valid Player Account. Players must be 18 years of age or older to Play the Game and Prizes will not be paid to persons under 18 years. The Player is required to log in to the Interactive System by entering a User ID and Password (created during the Player’s original on-line registration process) to gain access to this Game. When the Player has logged in to the Interactive System a choice of Games will appear on the instant win game lobby. The Player chooses the “California Cash” Game by clicking on the “Play” link on the Game Play Window. The Player is then shown a brief “How to Play” synopsis of the Game and is invited to ‘Play Now’ or ‘Try’. When the Player chooses ‘Play Now’ he is then shown the price of playing that Game and current Wallet balance, at which point the Player is invited to ‘Play Now’. When the Player opens the Game the Interactive System checks to ensure that the Player has sufficient Unutilised Funds to complete the transaction. The cost of the Play is deducted from the Wallet balance and the amended Wallet balance is displayed. The Game then connects to the Interactive System which randomly selects a Play which may yield a Prize from one of the Prize Tiers for this Game. The result for a Play is randomly determined by the Interactive System. The Player’s interaction with the Game does not impact on the result. The opening screen is displayed along with a ‘Settings’ button (cog symbol – bottom left hand side) which will open to display two further buttons: the Sound button and the “i” button which contains the synopsis of how to play the Game. The Player clicks Play. The Player is then presented with a Game Play Window which displays the following; A ‘WINNING NUMBERS’ play area which contains three (3) unique ‘WINNING NUMBERS’ (generated during the game load before the play icons become active). Each of these ‘WINNING NUMBERS’ will have an associated unrevealed ‘EXTRA WINNING NUMBER’ panel displayed directly beneath it. YOUR NUMBERS’ play area which contains fifteen (15) ‘Camper Van’ play icons arranged across three rows, where each row contains five icons. The aim of the game is to match any of ‘YOUR NUMBERS’ to any of the ‘WINNING NUMBERS (including ‘EXTRA WINNING NUMBERS’ where relevant) to win the PRIZE for that number. To commence Play the Player must click the fifteen (15) ‘Camper Van’ play icons, in any order, to reveal a number (between 1 and 40 inclusive) and an associated prize amount from the following cash amounts; €3, €4, €5, €10, €20, €50, €100, €500, €1,000, €5,000 or €30,000 If a Player reveals a ‘YOUR NUMBERS’ which matches with any of the ‘WINNING NUMBERS’, the associated ‘EXTRA WINNING NUMBER’ will be revealed automatically. Once the ‘EXTRA WINNING NUMBER’ has been revealed (and assuming there are non-matching ‘YOUR NUMBERS’ revealed), the game will perform an audit on all non-matching revealed ‘YOUR NUMBERS’ in order to check whether the newly introduced ‘EXTRA WINNING NUMBER’ has generated a main game win. When this automatic checking/matching is underway a description “Checking Numbers” appears on the screen as the game checks each open number one by one, line by line (if it hasn’t been matched before). If the Player matches any of ‘YOUR NUMBERS’ to any of the ‘WINNING NUMBERS’ (including ‘EXTRA WINNING NUMBERS’ where relevant) the Player wins the PRIZE associated with that number. Once all fifteen ‘YOUR NUMBERS’ and associated prize amounts have been revealed, the end game message and ‘FINISH’ button will appear. The ‘FINISH’ button will animate as soon as it’s active to prompt player interaction. The game is not complete until the ‘FINISH’ button has been clicked. Once the game ends a message indicating the result will appear: BETTER LUCK NEXT TIME or YOU’VE WON CONGRATULATIONS! YOU HAVE WON BIG WIN! JACKPOT WIN! <AMOUNT> The Player is required to acknowledge this message by clicking the FINISH button. The Game then ends and the Player is shown the game confirmation screen. If You purchase a Play and do not complete the Play, the system will automatically play out the Play within 24 hours. If a Low Tier Prize is won then that Prize will be paid directly into the Players Wallet. If a Mid-Tier (Level 1) Prize is won then that Prize will be paid by cheque and posted to the address specified in Your Player Account. If a Mid-Tier (Level 2) Prize is won then that Prize will be paid by cheque, stamped “Account Payee Only”, which will be posted to the address specified in your Player Account, upon receipt of a completed Prize Claim Form and your Identification Information (if not previously provided). If a High-Tier Prize is won then the Player will be notified and the Prize will be paid by cheque, stamped “Account Payee Only”, and which must be redeemed at National Lottery HQ subject to completion of a satisfactory validation process, including but not limited to your Identification Information.
Download a copy of the National Lottery California Cash rules (PDF)