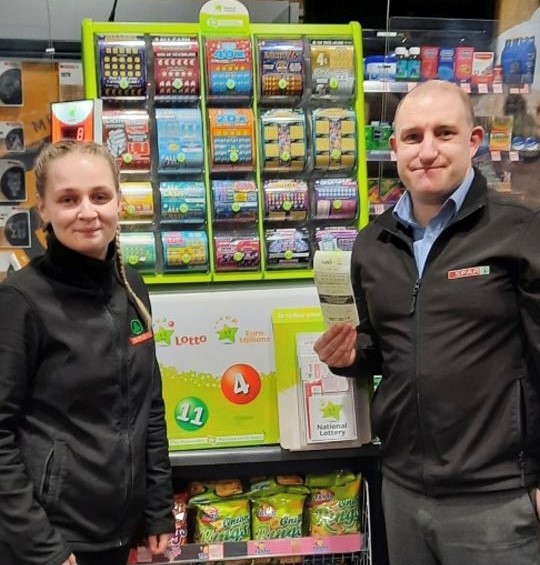 Wednesday’s Lotto jackpot draw was certainly a night of capital gains as two separate players in Dublin scooped two huge prizes in the bumper €7.5 million draw. The biggest winner of the night was a lucky Lotto player in Citywest in Dublin 24 who became the latest National Lottery millionaire after winning the Lotto Plus 1 top prize of €1 million.

The winning Quick Pick ticket was sold on the day of the draw at The Belfry Spar store in City West in the south west of Dublin.

Manager of the winning store, Warren Brennan has urged the residents of Citywest to check their Lotto tickets and said that due to the location of the store, it is more likely that the winner will be from the area, “The staff in the store are absolutely buzzing, knowing that somebody who came into the store yesterday is now a millionaire, it’s truly incredible! The store is situated in the heart of a large residential area here in Citywest so the likelihood is that one of the local residents is a brand new millionaire. Whoever they are, we wish them every bit of luck with their million euro win,” he said.

Meanwhile, another lucky online Lotto player from Co. Dublin also won a cool €112,078 last night after matching five numbers and the bonus ball in the main Lotto draw, falling just one number shy of winning the entire jackpot worth €7,507,955.

While there were 84,000 prize winners in last night’s Lotto draw, there was no winner of the €7.5 million jackpot. Next Saturday’s jackpot prize is heading for an estimated €8 million.

A spokesperson for the National Lottery said: “It was a bumper night of winnings for a large number of players in Wednesday night’s Lotto draw. We are asking all of our players to check their tickets to see if they have won a prize. For our players who play online, if you have won the €112,078 prize, an email will be waiting in your inbox with this brilliant news. If you are one of the big winners, please contact our prize claims team on 1800 666 222 or email claims@lottery.ie and we will make arrangements for you to collect your prize.”