The National Lottery created an incredible 30 new millionaires in 2019, with a record €640 million being won in prizes by its players during the past year, it was revealed today.

It was a memorable year for players of the Lotto game with a total of nine lucky jackpot winners claiming in of excess of €58 million in jackpot prizes between them. In total over €140 million in Lotto prizes was won with the biggest Lotto prize of the year won by a Wicklow family who claimed a mammoth €11.2 million jackpot in August 2019. 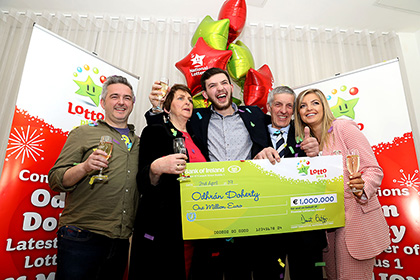 Photo Caption: Donegal farmer, Odhrán Doherty pictured with his family, collecting a Lotto Plus 1 top prize of €1 million from Lotto HQ was one of 30 millionaires created by the National Lottery in 2019.

The biggest National Lottery prize paid out in 2019 was the record breaking €175 million EuroMillions jackpot which was won by the ‘Naul Family Syndicate’ last February. In total, €266 million in EuroMillions prizes was won in Ireland last year.

It was also another record breaking year for scratch card prizes with figures showing that a total of over €188 million was won by players throughout the country.

In 2019, National Lottery players also raised €250 million for Good Causes, up over 9% on last year’s figure of €228.5 million. Approximately 1.4 million adults participate in National Lottery games on a weekly basis ensuring this vital contribution to Irish society continues to grow and to support more Good Causes all over Ireland.

Figures released by the National Lottery show that: